If you look at my last post you'll see it was a fall update and I haven't written for over 6 months! It isn't like I haven't had anything to say.......the last several months have been good to me with many things to celebrate, but it's more like the older I get the more private I become. But I regress....

Chad and I ran into some friends over the weekend who we haven't seen for years and I was asked about my blog. Since moving to our new (to us) home I feel like I have lost my writing niche. When we lived at the farm I felt I had an unusual, slightly eccentric spin on a life for a 40 something woman by downsizing, spending less, growing a lot of my own food and doing things the old fashioned way. Since moving, I am like any other basic woman living in a comfortable home in the suburbs....which isn't really blog worthy in my mind! 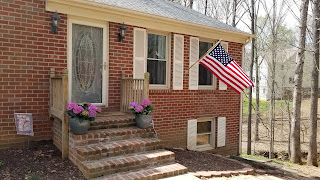 But her comment reminded me that there still are a few people who like to see what we have been up to, even if I don't have a garden or chickens anymore. So with that in mind I will share an update! This will be long because of my health update, so bear with me.

My Health: When I last wrote in October I was coming out a three month long depression which is the worst I have experienced since postpartum depression in 1996. During this latest depression, I gained an additional 15 pounds on top of the 20 I had already gained since 2014, putting me a good 35 pounds over my highest, healthy weight. My fibromyalgia was flaring and most days it was a struggle to leave the couch because of pain and exhaustion. I had also gone off my prescription anti-anxiety meds because I was experiencing side effects that were equally hard to live with.

In September, I went on CBD oil. For those of you unfamiliar with CBD I encourage you to study up on it. It is cannabidiol from the Hemp plant without the psychoactive effects of Cannabis. (It doesn't make you high and is LEGAL in all 50 states.)  While it didn't have an instant effect, 8 months later I can honestly say that it, coupled with a moderate amount of low impact exercise and an anti-inflammatory diet, has changed my life. I began to take it for my fibromyalgia and anxiety and within 6 weeks noticed a huge difference in my anxiety. For me, it works better than the lexapro and zanex I was on before, but without the side effects. 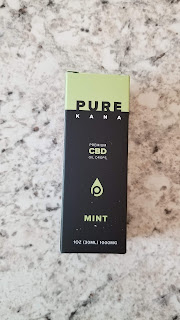 I was still experiencing fibromyalgia symptoms though, such as brain fog, body pain and exhaustion, so starting in November I knew the easiest way to put myself of a healthier track was to cut out the foods I knew was causing my inflammation. If you are a long time reader of my blog you may remember the experiment I did in 2014 to get to the bottom of my inflammation and tummy issues. Obviously, I did not stick with it as I was having to start all over again!  I began to juice again and started reducing not only wheat and dairy, but alcohol, too. At this time my body still hurt too much to exercise, but after a few cutting remarks about my weight by a well meaning person, I knew I needed to add exercise to the mix, even if it hurt.

I began walking with Mocha a few times a week, usually only a mile which would exhaust me and make me hurt even worse. I cut out wheat by 95% and dairy and alcohol by 75% and within a few weeks noticed a great reduction in my pain and my brain fog was almost completely gone!  By the end of December I had made it up to two miles and by February I was walking an average of 3 miles per day, 6 days a week.  I also added yoga once or twice a week and have hiked a few times, too!

Feeling great on the mountain top!

So where am I at now? I continue to walk 6-7 days a week usually 3-4 miles each day and do yoga weekly. I have stayed on my anti-inflamatory diet, get adequate sleep and avoid stress as much as possible. It's a chore to do all those things, honestly, but I would say I feel 90% better, so it is worth it. I still occasionally experience a fibro flare, but usually it's caused by stress or if I'm not conscientious with my diet.  I have lost 32 pounds.  The only prescription I take now is a sleeping pill. I haven't taken any over-the-counter pain meds since January, other than for an occasional headache. My mood has chilled out considerably, but I DO HAVE moods now...which to me is so much better than to feeling nothing like I did when I was on prescriptions. My depression is gone and although I still have days where I feel blue, it isn't anything like before and usually can be traced back to diet or environment.

The past 6 months have taught me that food is medicine and an all natural plant is better at helping my anxiety than any man-made drug. I am grateful to be feeling better! 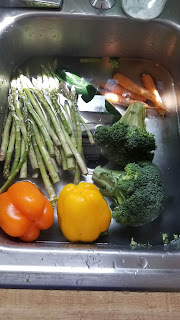 
The House: Since I have been feeling better I have been cranking out work on the house. We considered selling it this summer but eventually decided to not uproot our lives the last year of high school for Rem. It also would have added unnecessary stress to my life and I didn't want to chance a fibro flare. I have been painting up a storm and finally see light at the end of the painting tunnel with only a few rooms of trim left and the laundry room to paint and I will be DONE! We also have been working on landscaping and in a few weeks my brother will be coming to replace the lower deck and bathroom floor.

Some of my painting projects! A fresh coat of paint in the master bathroom makes it look updated, even with the yellow tile! I still would love to remodel the entire room, but it looks nice until we can save for that....or move. 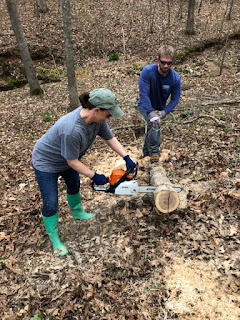 Fun with the chainsaw!

Chad: In January, Chad went back to school to get his Master's degree in Psychology. He will finish next summer and we are excited to see where that will take us once he is done. We will be footloose and face free empty nesters then...... He has been busy with end-of-year events at the university and is looking forward to a laid back summer to dig in to his classes. He still enjoys reading and writing but I manage to rope him into house projects occasionally.

Volunteer Work:  I have been getting my gardening kick this year by volunteering at Thomas Jefferson's home, Poplar Forest. This year I am planting and maintaining the interpretive garden, which showcases some of the fruits and vegetables Jefferson grew on his estates. For those of you unfamiliar with Poplar Forest, it's Jefferson't retreat home about 4 miles from us. Built in the same style as his main home, Monticello, it is a lovely place to visit and get a feel for architecture that Jefferson loved. I have enjoyed learning about Jefferson and I hope to eventually be a tour docent once I feel more familiar with all things Jefferson related! 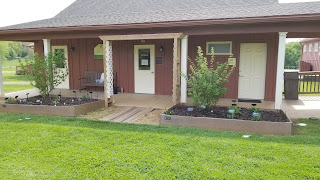 The interpretive garden beds outside the visitor's center. 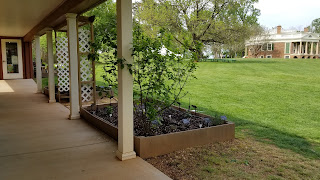 Future Plans: Spring and summer look to be filled with work and fun. I will be helping my brother with the work he does on our house in a few weeks. Rem and I also plan on a road trip back to Nebraska in June and I hope Chad and I can run up to DC for an extended weekend some time this summer. I look forward to continuing my volunteer work and learning about Jefferson. I also would love to get more involved in state and local politics with the upcoming elections. I hope to see all my children at some point in time this year! Oksana and Derek have moved to Ohio so they are only a day's drive away and Nakoma and Phoebe are 7 hours away in Tennessee. Naomi is headed back Japan in a few weeks but we hope to at least see her at Christmas once she returns, or at the very least early next year.

Well friends, that's wrap! If you made it through this novel I'm impressed! Shoot me any questions you have about CBD or an anti-inflammatory diet and I would be glad to share more in depth of how they have helped me.

Have a great May, friends!

Posted by Rebecca at 8:19 PM No comments: