Chad had meetings for work in New York City last week and I got to tag along! We were able to stay an extra day and a half to sight see, which was super exciting since I have never been to NYC. Tuesday morning we were up at 4:30 AM so we could catch the 6:00 AM train. This was another first for me as I had never traveled by train before.  Growing up in Nebraska, there isn't much train travel; there is one Amtrak line that runs through the state, but you only have limited options as to where you can go.  Both Chad and I agreed we prefer train travel to plane.  Yes, it takes a bit longer to get where you are going, but I love how laid back it is....no security checks, no lines; you simply hop on and go.  And the seats are awesome!

Since we were getting into Penn Station in the heart of NYC during the afternoon, and staying in Brooklyn, I proposed that we only pack backpacks for the week.  This way we didn't have to cart our luggage all over the subways.  I am glad we did because they were stuffed full of people at rush hour!  I chose this backpack after a long drawn out search. Anytime I shop for anything new, hours are spent reading the reviews and comparing prices. I have 3 other trips planned this summer and fall besides New York, so I knew I needed something that would be a good carry-on....or in this case, my only piece of luggage.  I loved it; it was a little more attractive than a typical backpack and was very comfy to wear and did not hurt my back. 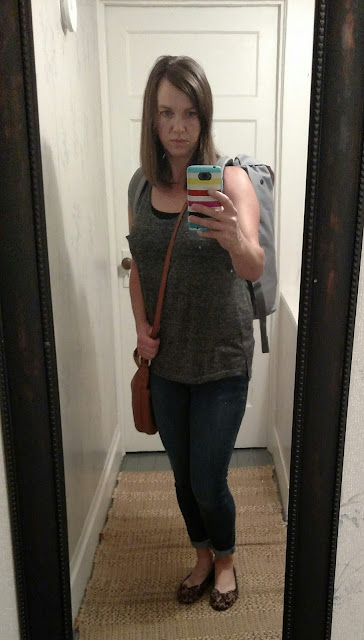 I packed 3 dresses, a sleeveless jacket, a pair of sandals, a cardigan, pjs, a bag with makeup and hair stuff, and my kindle.  I wore a tank top, jeans, and flats the day of travel. The dresses were thin and easy to pack and did not wrinkle, so I didn't have to worry about ironing. The only thing I wish I would have packed was a hairdryer, but I wasn't able to find a good travel-sized one before I left.  Because of this I mostly wore my hair up until the last day when we stayed in a hotel with a hair dryer.

So on to the fun pictures!

We stayed in Brooklyn the first two nights since Chad had meetings there.  We found a cute little coffee shop, Roots Cafe, right down the road from our apartment. If you ever go to Brooklyn, I highly recommend it.  The owner, Amanda, is the sweetest lady, and their coffee is unbeatable; the salted caramel iced coffee is to die for! 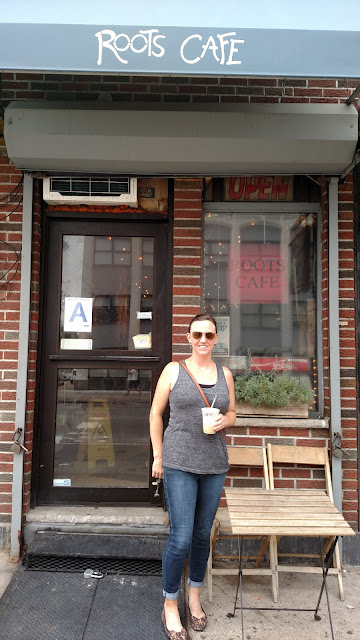 Perking up a bit after getting rained on and coffee......

The next day Chad had meetings in Brooklyn during to morning hours.  What a great little bakery and cafe for a meeting! 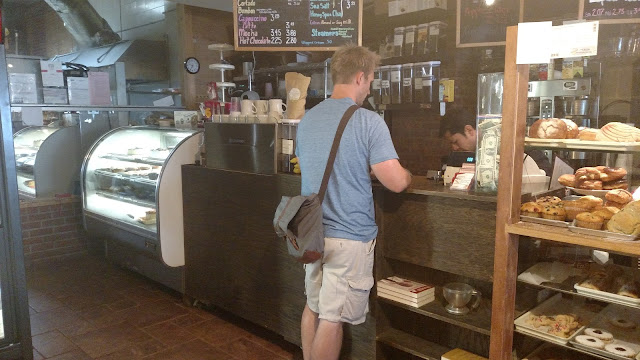 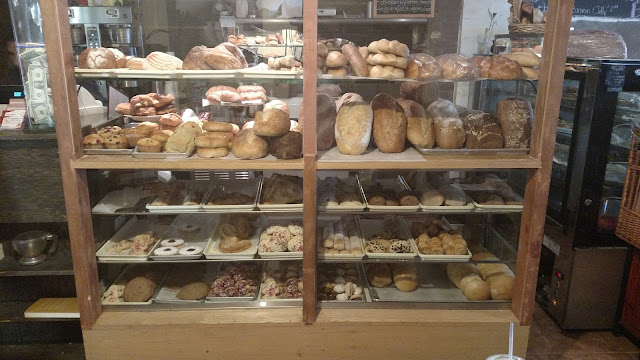 After his meetings were accomplished we headed into Manhattan where we visited the 9-11 Museum and the pools on the grounds.  It was a very sobering experience to be in the exact place of the terror attacks almost 14 years ago. The museum was great and I highly recommend a visit here if you are ever in NYC. 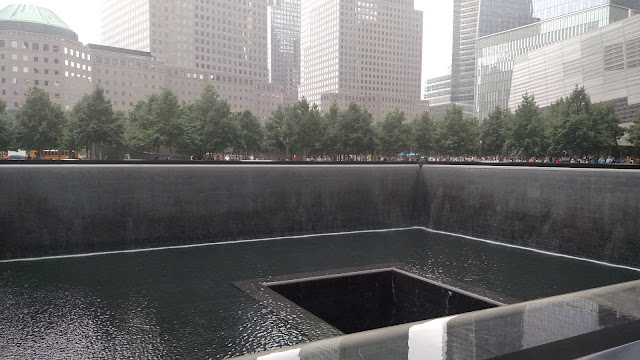 The day was dreary....very appropriate for visiting the memorial. 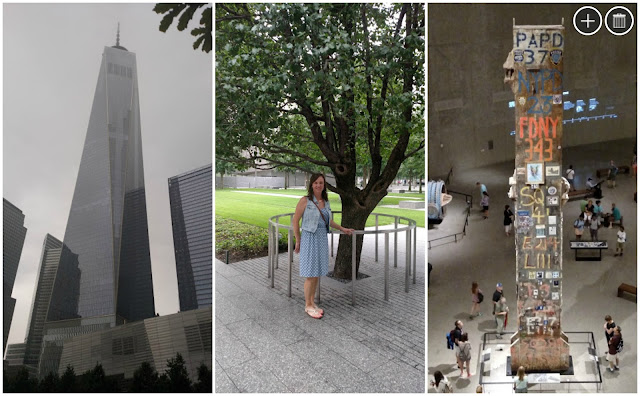 The Freedom Tower, The Survivor Tree, and The Last Column

After the museum, we stopped for a late lunch at the little corner cafe and then wandered around the Tribeca neighborhood and out to the pier. We also caught the Staten Island Ferry and got a glimpse of the Statue of Liberty.  Next time we go to NYC I want to go to Ellis Island and actually visit the Statue of Liberty on her island. 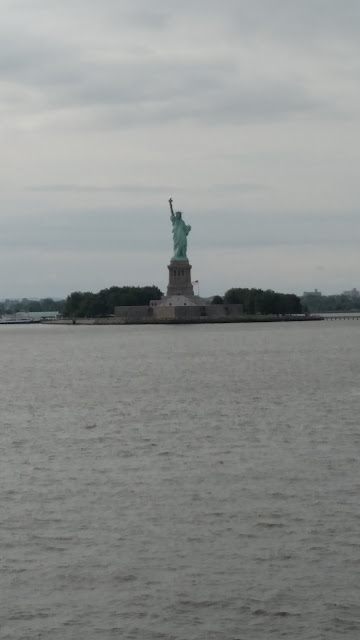 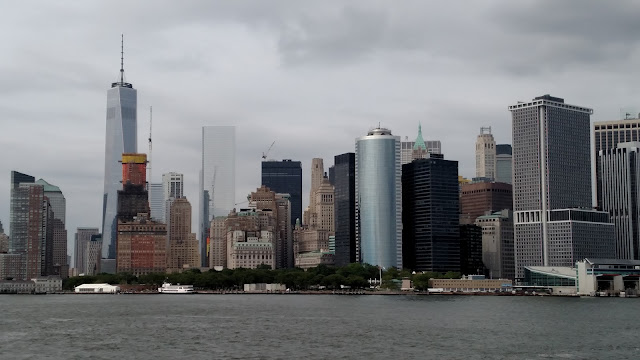 The view from the ferry coming back into the city. 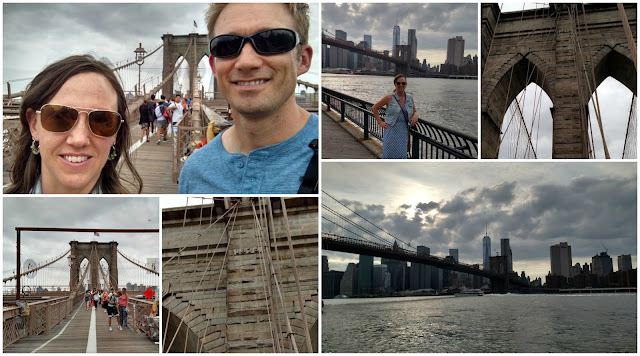 The following day was sunnier and we moved into the city for our final night there.  We had a hotel just off of Times Square and the hustle and bustle of the area. What a day! 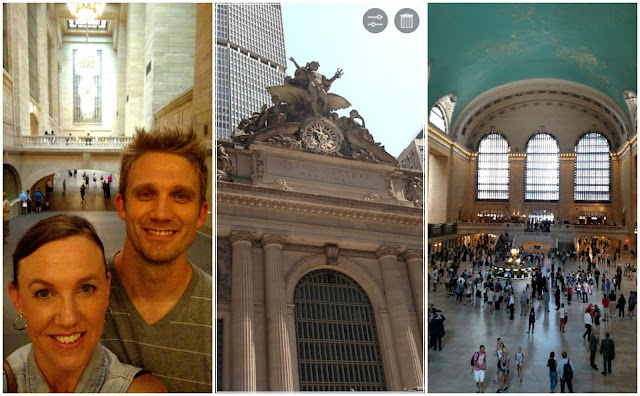 We decided we would walk to Central Park from our hotel on 42nd and made a quick stop and Grand Central Station. Unfortunately, the pictures didn't turn out the greatest since I just got a new phone and am learning how to use the camera feature.

From there we continued on foot to Central Park where we stopped at Tavern on the Green for lunch. 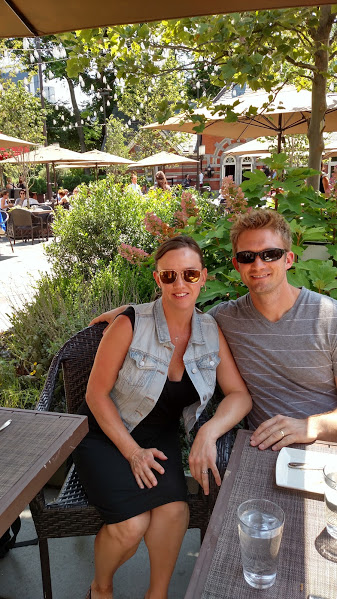 Shortly after this is when we heard about the shootings in Chattanooga of 4 Marines and 1 Sailor at a training facility, so my pictures from the rest of Central Park are not that great. Since we have family in Chattanooga and ties to the recruit center that was shot up, it really hit home for me. :-( My mind was on it all rather than taking good pictures.

The rest of the day was spent wandering all the way to the north end of Central Park at 108th! Central Park is beautiful, but next time I go I need to pack better shoes!

Chad and I eventually made it back to our hotel, exhausted.  This was our last night in the city so I suggested that even though we were tired, we make a quick trip to the Empire State Building.  I have watched An Affair to Remember and Sleepless in Seattle too many times! Of course, like any tourist spot in NYC it wasn't quick!!  Our exhausted bodies, which had walked almost 10 miles that day in bad shoes, had to stand in line for 2 hours.  It was after we purchased our tickets so we just couldn't give up and go back to our hotel.....Needless to say we took a few pictures and headed back. Very anti climatic....... :-) 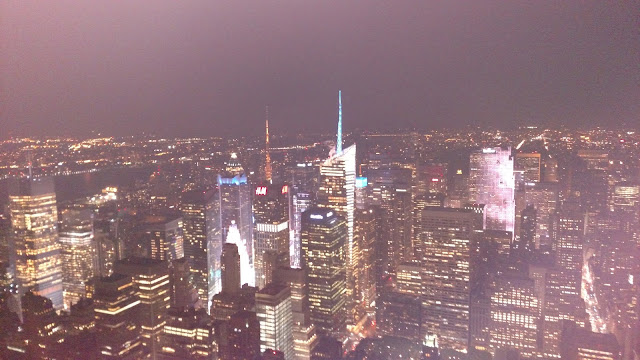 The last morning we had intentions of catching the subway to the Chelsea Market, but we were so tired from our two days of walking.  Instead, we just grabbed a bagel at a little corner shop and wandered the Times Square area a bit before catching the afternoon train home.

So that is a wrap up of NYC. It was a fun trip and we definitely want to go back, but next time we will pack better shoes! I have to say, I enjoyed Brooklyn a little more; it's quieter than Manhattan and I loved the old buildings and cool park.  Plus, the restaurants and coffee shops are fabulous and quite a bit cheaper. We will certainly stay in Brooklyn again if we go back.

My minimal packing also worked out just fine. It was great to have the freedom of just a backpack to worry over and I really didn't miss all the extra stuff I pack, except a hairdryer.

I have another trip planned next week.  I am SO excited to head to San Diego to see Naomi and stay with my Aunt and Uncle.  I haven't been to San Diego for 25 years, so I am anxious to see the city as an adult as well as spend time with family.

Have a lovely week, friends!