This is the Part 3 of a series telling about how we came to the point in our lives where we were willing to sell half of our belongings, give up our lifestyle and move away from family and friends, including our 3 teenage daughters and move to the Appalachian Mountains of Virginia so my husband, Chad, could go to seminary. If you missed earlier posts here are Part 1 and Part 2.


In order to pay off $20,000 of debt in about a year and a half we had to really buckle down.  We had to sacrifice some things we wanted and be organized.   We followed Dave Ramsey’s Baby Steps very carefully.  For those of you who are unfamiliar here is his plan in a nutshell. 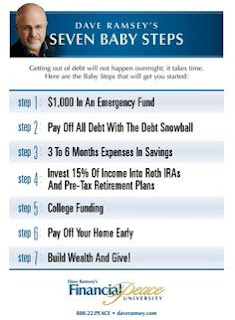 First we established an emergency fund of $1,000.  Since we already had over that in savings we applied the rest in savings to my credit card balance and started sending all extra money towards that balance.  I do not like having that little in savings so it motivated me to get with the program of paying off debt.

Next we took a look at our budget and nit-picked every single thing we were spending money on. We started cash envelopes for everything from dry cleaning (at the time Chad wore a suit everyday) to car maintenance.   Some envelopes, like groceries, we would use the entire sum every month, while others, like car maintenance and household, we would carry over for when we needed it.  We agreed to go without some things and spend less on other things.  We budgeted a little money for fun spending for Chad and I.  That money could be used how ever we saw fit.  We could save it for a bigger purchase, or use the entire sum one month at Starbucks. We also budgeted for a date night for Chad and I.  We found this very important so we could get away and have uninterrupted conversation.  These two areas we actually cut quite a bit because before I was spending at least $100 on "fun" just by myself. Here is an idea of what our envelopes looked like.

All other bills like our mortgage, insurances, phone, internet and utility bills were paid through automatic payments.  All the money left over after funding our envelopes went to our debt.  Here are a few things we cut out of our budget or changed in order to give us more cash flow.

Gym Membership – This was a hard one, and not one everyone will be able to do.  We were able to keep up our fitness with things at home and save the $60 per month.  This was only temporary; once we were out of debt we added it in our budget again.

Car Insurance – We raised our deductible to $1,000 from $500.  Since we had the $1,000 in savings for emergencies, that would cover the deductible if we were in an accident.

Life Insurance - We restructured our life insurance a bit, lowering what we had on me since if I were to die Chad would still have a job.  I was still insured, but just at a lower amount. We kept Chad's the same.

Other ideas would be cutting out cable, but we hadn't had cable since 2002.  We did have a Netflix streaming account which was $10 per month for our entertainment, but we kept this during this time. Another one most people can cut out or at least lower is eating out.  The only eating out we did during this time was if we were on the road traveling for the kids' activities, and even then I would often pack lunch if it was just one meal.  We also ate out on our date night every few weeks since that was in our budget. But the rest of the meals were cooked at home.  This is totally doable, even if you work full time, if you own a crock-pot.  Chad took left-overs, sandwiches or wraps, fruit and vegetables for lunch to save the expenses of lunches out. A cooler and some ice packs were all he needed to keep it fresh.

With the budget established, the real frugal living began.  Following Dave’s plan we started working on the debt with the lowest balance (my credit card).  Applying the savings money to the balance, we were able to start paying down big chunks monthly. 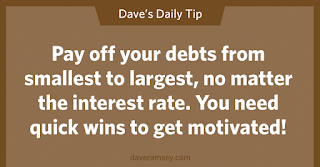 I began to look for ways to add money to the money to the pay-down each month.  I had a garage sale, I took some of my high dollar clothing that I thought I couldn't live without to the consignment store, and others I listed on eBay.   I even took some old gold to one of those creepy, hotel conference rooms, gold buying people. (Note: you are better off taking your gold to a reputable jewelry store that buys old gold.  Lesson learned.)  With all this I had several nice piles of money to add to the debt reduction.

Then I took a look at my grocery budget.  We eat pretty healthy; a lot of fruit, vegetables and lean meats are part of our diet. This was not something I was willing to sacrifice.   I began to look through the sale adds every week in the paper.  I shopped at 3 different stores compared to the 1 super-store I had shopped at before.  When the cost of a bell pepper fluctuated more than 75 cents per pepper at different stores it paid to shop sales and more stores.  I was able to lower my grocery budget around $100 per month just by shopping sales ads.  Yes, I did have to drive to 3 stores, but our town is small enough it wasn't a huge drive.  I devoted a few hours once a week in the early afternoon to shop.  I added coupons to my grocery list, paired with the things that were on sale.  I only used coupons for things we actually regularly bought and would combine them with a sale item.  The majority of coupon savings were from health and beauty and cleaning and laundry products.  By couponing I saved about another $50 per month. I usually spent about an hour a week with the sale ads and my coupons seeing what I needed to get at each store before I shopped. But you know what the biggest money saver was?  I stayed out of stores.  With the exception of the grocery stores I did not go into any clothing or home stores unless it was absolutely necessary! This was another $100 per month, at least, that I saved.

With these simple steps we were able to pay off my credit card balance in a matter of months.  Any extra money went to that balance.  It became exciting to make payments.  One time I made 5 payments in a month.  It was very motivating!  We were now left with only our 2 car payments to deal with.  We began with mine since I had the lower balance.  All money we were paying to our credit card now went to my Suburban along with the regular payment.  Bonuses came along for Chad, so we added that to the payment.  Any other year it would have meant new things for us and the family, but not this year!   I took more clothing to the consignment store and listed more on eBay.  With these steps we paid the remaining balance off on my Suburban in about 7 months!  We were now left with only Chad’s truck payment.  By now it was a fairly large amount to pay towards it with no other debt besides the truck and, of course, our house payment.  We had been almost a year into our debt reduction plan and already we were way ahead of where we needed to be.  We both were pleased. With more momentum we sent every extra dollar to Chad’s truck loan and by the time 2012 got here we were debt free except for our house.  You can’t imagine how good it felt!  I have had debt my whole adult life.  True, there may have been a month or two where I was caught up with my credit card balance, but I can only think of a handful of times that had happened.  I vowed to keep it this way this time and for the last two year it has been.

Next time I will share the following year of getting out of debt, the things we continued to do to save money, and the restlessness we felt to live a simpler life.