In honor of Valentine’s Day I thought I would share the story of how Chad and I met.  Ours is an unusual story, just like everything else in our lives. J And while this post is a little long, I really think you'll enjoy hearing our story.

Before I can start the story I need to tell you a little of my background before we met.  I married at 16 (yes, you read that right, 16) to my high school boyfriend, Jeremy.  On May 27th, 2001, just 7 months before Chad and I met, Jeremy died of a medical condition while fishing by himself one day.  I was left a widow at the age of 24 with 3 little girls and a little boy on the way.  I was 8 months pregnant at the time of his death. The next 7 months following were full of tears, trials, and growth as I had never been on my own before.  I would not have survived if it had not been for my church family who loved on me, helped me, and prayed for me through that time. As you can imagine, the last thing on my mind when January rolled around was looking for a boyfriend.  Not to mention I had no great hope of any man coming into my life and not only loving me, but also my 4 children.  But I was ok with this.  I had plans to move forward with my life, possibly going to college and then on to a career, but also to move to a neighboring community.  This was not something I had envisioned for myself, I had always wanted to be more focused at home, but I knew I needed something for my future.

My good friends, Renee and Melissa, had thought they would use their match-making skills to find me a man, or at least another single person who I could spend my time with.  Renee knew Chad from the bank he was working at and had enough conversations with him to find out he was a great guy, single, and involved in a church and singles group at a nearby community church.   They knew I had plans to possibly move to this community and even though they assured me that their only idea was to find me some new friends, looking back I can see what their motive was.  J So Renee talked Chad into calling me, telling him of my plans to possibly move and of my background losing my husband.  Thinking of me as a ministry opportunity, Chad called me on January 16th, 2002.  Our conversation ended up being 100 minutes long as we talked about our background, families, hobbies, and spiritual beliefs.  At the end of the conversation he asked if I would be willing to go out to dinner the following week, to which I agreed.  While I really was not interested in a “boyfriend” at the time, I was still excited for the day of our “blind date” to arrive.  My friends had refused to give me much details on him other than he was a nice man.

To say I was blown away when we met would be an understatement.  Not only was he extremely good looking, but he was an all around genuine person.  He too, was attracted to me, although, at the time neither one of us showed it in any way to one another.  We had a great time on our dinner talking more about our lives, backgrounds, and future plans; although I kept saying to myself he was only doing this to get Renee off his back and I most likely would not hear from him again.  Interestingly enough, 3 days later he called me and asked me to go to a hockey game with him.  Another great time was had by both of us at the game and the dinner we went to afterwards.  For an introvert like me this was nerve racking, but as the evening wore on I found that I was able to be more myself as I got to know him better.  The following 2 weeks we talked on the phone a few times and he came to my house to watch a movie with the kids and I.  It was then he asked me to go to a town 75 miles away for dinner at a very, very nice restaurant.  There was something in this request that made me very nervous.  This was not a hockey game, or a movie, or a conversation on the phone.   This was something more serious.  I already had felt myself wondering where this was going and thoughts about how I didn’t want a “boyfriend” were almost a thing of the past.  While we still had not really shown each other how attracted we were to each other, this request made me think that there was the possibility of our relationship becoming more serious.  Chad had met the kids and had immediately clicked with them on our movie night.  My children were, for the most part well behaved, but you would think the thought of 4 of them, ages 7, 5, 5, and 6 months would send any man fleeing the opposite direction.  After all our conversations he knew how important the kids were to me and how I wasn’t interested in having random boyfriends around to confuse them.  This whole invitation out to dinner made me think he wanted to be more than some random boyfriend.

So the day came, I dressed in a little black dress, which was appropriate for the venue where we had dinner.  That afternoon the snow had started to fall, just lightly, not enough to worry us about going out; this was Nebraska after all.  The evening was fantastic!  A lovely old Victorian house turned into a restaurant with delicious food and a cozy atmosphere.  Chad was the ever attentive date, taking my arm to guide me over the icy sidewalk on the way back to his car.   Over the course of the evening the snow had really picked up; but despite the fact, we went over to my friend’s house and then out to coffee with her and her husband. At the end of the evening my friend whispered and asked if we were actually “dating”.  I didn’t know.  It certainly seemed like it after the wonderful evening, but I was not sure, nothing had been said about the status of our relationship.  I was hoping he would bring it up, but also scared that he would.  I was feeling too attracted to him to just continue casually going on as friends.  I needed to know if I was feeling too much, that maybe he was this attentive to all the girls he was friends with and I was reading too much into it.

The roads had really turned worse as we turned towards the 75 mile drive home.  The trip that normally took one and a half hours now took three and a half.  Even with the bad roads we continued to talk about everything, everything except what was on my mind.  Ten miles from home I could not stand it anymore, I had to know.  I told him how I was getting questions from all my friends about our relationship.  He, too, had been getting these questions.  I told him I would really like to know what to tell these people, but I wasn’t really sure what we had going on.  He agreed. He then told me how he really wanted our relationship to be taken to the next level, but wasn’t sure how to approach it since I was fairly recently widowed.  He was not interested in it being casual; but when he dated, he wanted it to be with a person he could see himself possibly marrying, if it that's the direction we felt it should go.  He had also been in a serious relationship in the past and had no desire to jump into the typical “dating world”.   I told him I was not interested in casual dating either, for the kids’ sake as well as my own. We agreed that this was something we both wanted, but rather than decide right then, we decided to think about it and talk more the next day. After safely arriving back to my home, he walked me to the door and we parted.

The next day we both knew.  We wanted to date with the serious intention of marrying at some point in time if we both continued to feel led in that direction.  There were no “I love yous” at that time, although we both knew we cared for each other.

Over the course of the next several weeks we saw each other more often and our attraction continued to grow; not only physically but mentally and spiritually as well.  Chad would often come over and have supper with the kids and me and we would put the kids to bed and spend hours talking before Chad would drive home.  We spent many, many long hours in conversation about our thoughts on life, beliefs, and children.  We found that we shared many of the same core values.  Chad admired the fact that I would rather be a stay-at-home mom than having a career and that I enjoyed serving my family.  I loved the fact that if we married, Chad would want to adopt and raise the kids as his own.  As the weeks progressed I found myself falling in love with this man who seemed to be exactly what I needed, the kind of man my mother had prayed for since I was a little girl.  On March 2nd  Chad told me he loved me, which of course I returned, and on March 18th he presented me with an engagement ring and told me he wanted to spend the rest of his life with me and raise the kids as his own.  Through tears of joy I accepted.


We married just 9 days later on March 27th, just two and a half months after our first phone conversation.  There was no wedding, just a justice of the peace.  We were so in love we did not want to wait to begin our life together, and although I wish I would have put a bit more thought into the plans of that day, (we married when the kids were in school!) I do not regret at all the decisions we made.  Over the course of the last 16 years we have had many ups and downs.  There were times of not seeing eye to eye, stresses of raising kids, and sadness of losing loved ones.  However,  there have also been times of great joy and contentment knowing I am with my soul mate who completes me. 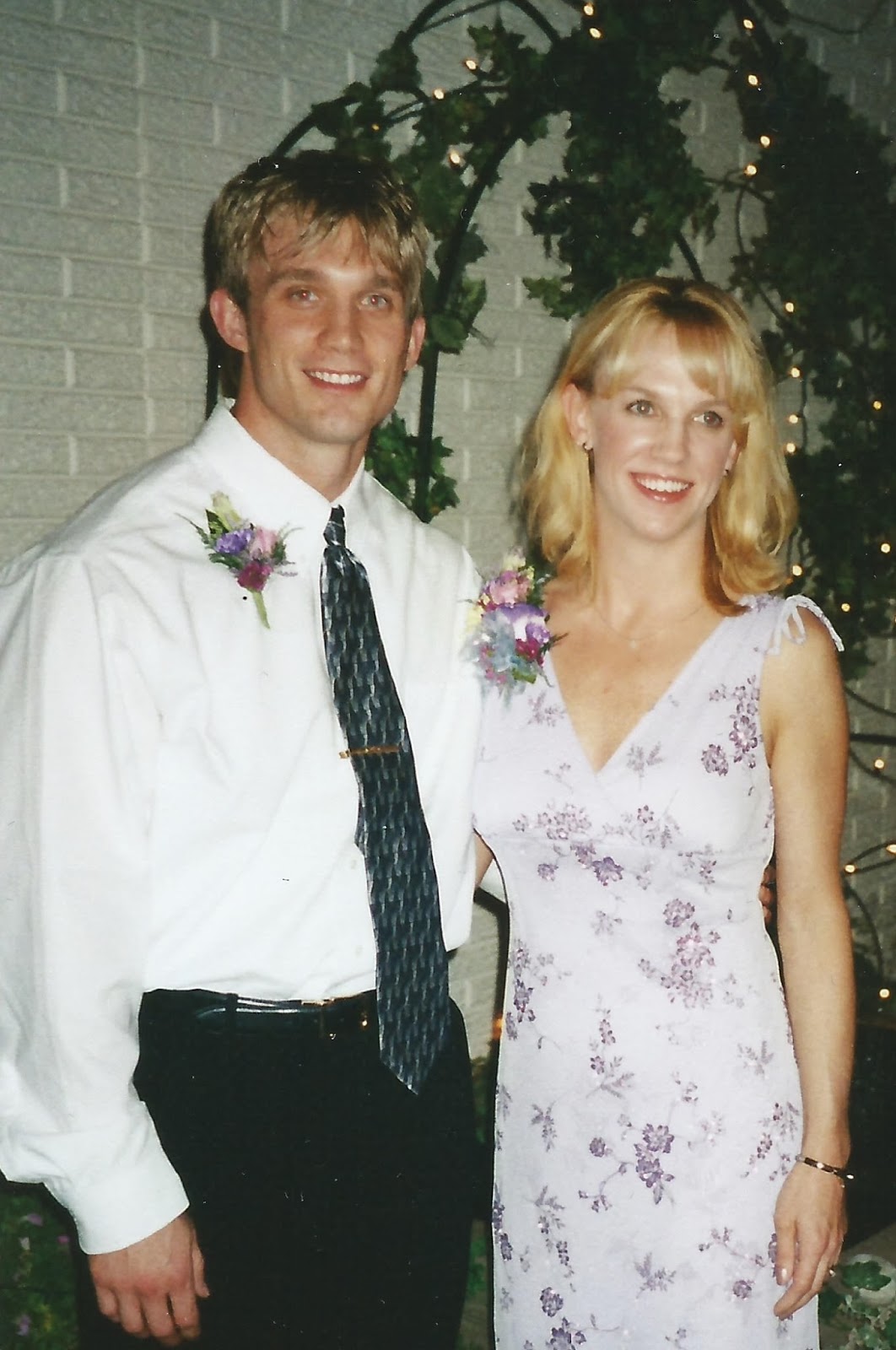 Email ThisBlogThis!Share to TwitterShare to FacebookShare to Pinterest
Labels: Family, Marriage, Our Story